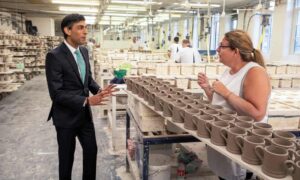 Rishi Sunak has insisted that he will close the furlough scheme at the end of next month – but this week hinted that he could announce new measures to protect employment, telling MPs he would use “creative” ways to help keep people in jobs.

The government will pay bonuses of £1,000 for employers who bring back furloughed staff, and has launched the £2bn “kickstart” job creation scheme to fund work placements for under-25s.

But business groups, trade unions and Labour want additional measures to prevent a full-blown job crisis this autumn. Some of the options he could consider include:

The powerful Commons Treasury committee has urged the chancellor to consider targeted extensions to the furlough scheme for the hardest-hit sectors of the economy.

While the share of the UK workforce on furlough has fallen from 30% in May to 11% most recently, the figures are far higher for some sectors, where businesses remain closed or face tough physical distancing measures. More than 40% of workers in the arts, entertainment and recreation industries were still on furlough in mid-August, while almost a third of workers in hotels and restaurants are still away from their posts.

UK Hospitality warned that 900,000 jobs in the sector were at risk without targeted support from government.

The TUC has outlined a plan for a short-time working scheme, which would involve the government subsidising workers’ wages for hours they do not work. The TUC has the ear of the chancellor, after helping Sunak design the furlough scheme earlier this year.

Under the TUC proposal, workers would receive 80% of pay for the hours they are not in work, including when they are training. Their employer would receive a 70% state subsidy, provided they bring back every worker for a minimum proportion of their normal working hours. Such a plan would cost less than the full furlough scheme, as companies must contribute.

The plan is similar to schemes used in Europe, such as the German Kurzarbeit (“short work”) scheme, which has been extended from 12 to 24 months – taking it well into 2022. Austria and France have also extended similar systems.

Business groups want the government to reduce the cost of employing workers. According to research from the Institute of Employment Studies, employer NICs are the single largest non-wage labour cost companies face. The thinktank said employer NICs represent a tax of 13.8% on earnings above £8,788 a year, adding about £2,400 to the cost of employing someone on an average wage.

Sunak could raise the threshold at which employer NICs are made to encourage firms to hire workers.

The chancellor could consider other ways to reduce the costs businesses face, helping them to retain or take on new staff, although such policy moves would lack a direct link to employment. One move called for by companies is a reduction in business rates – the tax companies pay on the premises they occupy.

Business rates holidays have already been used for some retail, leisure and hospitality firms in response to Covid-19, but employers’ groups want the government to go further. The government is due to complete a review of business rates next spring.

More funding for the Treasury’s kickstart job creation scheme could be used to expand the programme. The scheme provides funding for businesses to take on a 16-24-year-old for a six-month work placement on the minimum wage. Employers can choose to top up wages.

The Learning and Work Institute, a thinktank, has called for an additional £1bn funding for the scheme to expand it to include over-25s.

After Boris Johnson campaigned on a promise to hire more police officers, doctors, nurses and teachers at the election, the chancellor could provide more funding for public sector jobs to prevent higher levels of unemployment.

The TUC has urged the government to create 600,000 new public sector roles across health, social care, local government, education and public administration. The Learning and Work Institute has also said £7.6bn should be ploughed into social care, childcare and adult learning schemes to create 270,000 roles across the economy.

However, campaigners, thinktanks and trade unions have called for the chancellor to go further, saying the package is worth much less than £36bn of spending announced for similar plans in Germany. The TUC has called on the government to bring forward at least £85bn of infrastructure investment, with the potential to create 1.24m jobs.

The government could use tax and spending policies to raise demand in the economy for goods and services, giving companies greater confidence to keep staff or hire new workers. However, these measures are not directly linked to employment.

Sunak used the eat out to help out scheme and a targeted VAT cut for food and non-alcoholic drinks to help the hospitality sector, and could expand his use of such policies. He has also defended the stamp duty holiday, until March next year, as a means of stimulating housing market activity and raising demand for goods and services connected to moving home – such as solicitors, estate agents, removal firms and tradespeople.

The Resolution Foundation has suggested Sunak use a voucher scheme to give all adults £500 and children £250 in vouchers to spend in the hardest-hit industries.

Sunak announced a temporary boost to universal credit at the onset of the Covid-19 crisis to cushion the financial blow for those who did not benefit from furlough or the self-employed income support scheme.

The £1,000 increase did not, however, make up for a decade of austerity. The Institute for Fiscal Studies estimates that families falling out of work will get £1,600 less on average in benefits than they would have done in 2011. The boost is also due to expire in March 2021.

Calling for the increase to be made permanent, the Resolution Foundation has warned that allowing it to expire would risk six million households seeing their income falling by more than £1,000 from the start of April next year.